An epidemic is wiping out entire populations of our native fire salamander. We can save it if we intervene: through quarantine, therapy, conservation breeding. Now.

Bad start into the new millennium for Europe's fire salamander

A new type of fungus on the skin of amphibians was discovered in the Netherlands only a few years ago: Batrachochytrium salamandrivorans, or Bsal in short. The translation of its name clearly spells out the danger it poses: the salamander devourer. It is spreading at breakneck speed among European caudates. While newts overall seem to be less affected, an infection is almost certain to be fatal for fire salamanders. Entire populations are threatened by extinction.

Where did the fungus epidemic come from?

It is assumed that Bsal originates in East Asia and found its way into Europe through the trade with Asian newts. It could, however, also have travelled with aquatic plants or in a moist clump of clay: put simply, we do not know. What we do know is this: it will stay. And spread further – with devastating consequences.

Bsal got into open nature somewhere in the tri-border region between Germany, the Netherlands and Belgium at the beginning of the 2000s. From here, the fungus moved towards the East and seized the Ruhr area. By summer of 2020, it had eventually managed to make a giant leap across 500 kilometers and appeared at several locations in Bavaria. 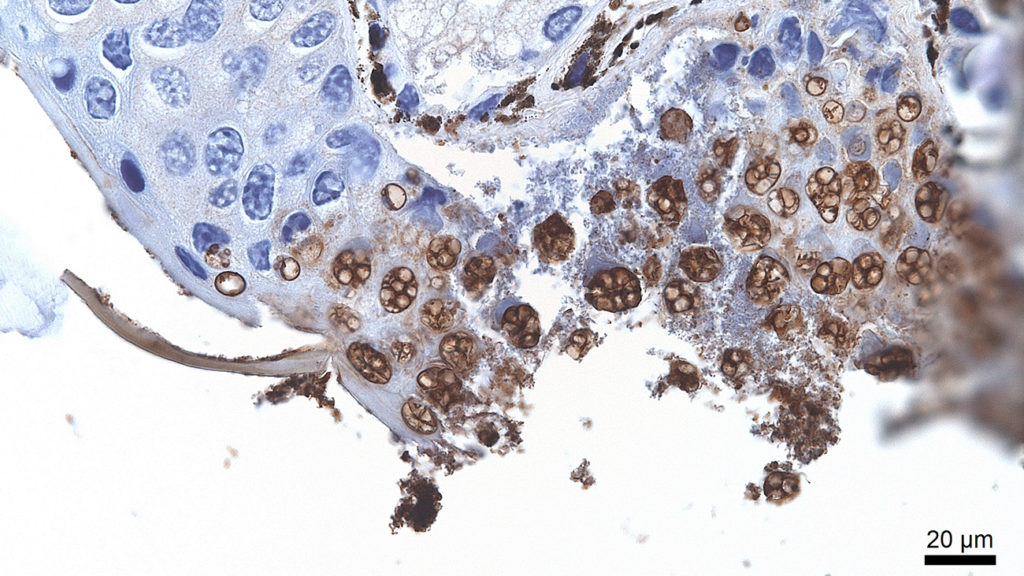 Bsal afflicts the delicate skin of the amphibians. It feeds on keratins and sprawls so massively that it ultimately leads to an outright suffocation of the animals. External skin damage becomes apparent only at an advanced stage, and by this time it is usually already too late. For fire salamanders, an infection with Bsal almost inevitably leads to death. In other words: in regions where Bsal appears, the fire salamander is effectively being extinguished.

Extinction can be prevented

The good news: Bsal is treatable. For fungus and amphibian have something in common: neither of them like high temperatures. In contrast to the fungus, though, fire salamanders can deal with higher temperatures quite well for a certain while. This, precisely, is the key: if infected animals are placed in a heat chamber at a minimum of 25°C over a period of two weeks, Bsal dies and the amphibian can recover. However, it is not possible to release it back into its forest immediately, as the fungus still lurks there. For now, it is entirely unclear how long this threat will remain in the habitat, whether the salamanders will be able to develop an immune response and how one can best support them in such process. Until these questions are answered, they can only survive in human custody.

Three steps for the rescue

Three steps for the rescue

Every donation helps us further expand our network for endangered species

Establishing and coordinating conservational breeding of fire salamanders is key to their salvation. Citizen Conservation has set its aim on precisely such action, working to drastically increase the number of shelters in human custody for threatened animals – we will need these safe zones. Here and now for our endemic fire salamander.

The salamander devourer on film

Author Susann Knakowske accompanied scientists, conservationists and animal owners on film for over a year. It wasn’t planned, it just turned out that way. Because neither Corona nor the Bsal jump to Bavaria were on the filming schedule when we began preparations for a fire salamander documentary at the end of 2019. And this story is far from over. But the first film is ready and gives an overview of the state of affairs regarding salamander eaters in spring 2021.

The extinction of species is threatening our livelihoods. Citizen Conservation unites scientific expertise with engagement by civil society. Together, we can master the challenge.

Stay up to date

Our newsletter informs you about further developments